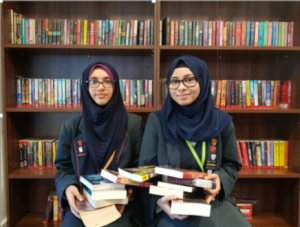 Two pupils recognised for service to Eden Girls’ School have given our school library a £500 boost.

Badriyah Islam and Rabia Shaikh were winners in the latest round of the Jack Petchey Foundation Achievement Awards.

Each girl was awarded £250 to be spent within school. As both Badriyah and Rabia are book lovers and library prefects, the girls agreed to use their prizemoney to add more books to the school library.

The Jack Petchey Foundation Achievement Awards aim to celebrate the achievements of young people, while investing funds in their schools, colleges and youth organisations.

We gave pupils the opportunity to nominate their peers who they felt were worthy of an award. A student vote took place in the summer 2017 term.

Badriyah, a Year 11 pupil and now Head Girl, was nominated while she was in Year 10 for her helpful and supportive nature towards fellow pupils. Badriyah offers informal mentoring to pupils across all year groups, and her nomination reflected how she gives up her time to support others. Badriyah’s award also recognises her dedication to representing the school at events and the qualities that make her a good ambassador for the school.

Rabia, a Year 8 pupil, was nominated when in Year 7 for displaying many positive attributes that make her a good friend to everyone. Rabia’s nominations also commented on the support she offers to fellow pupils in lessons. Her award also recognises how well she settled into secondary school life during Year 7.

Hannah Malik, our Assistant Principal, said, “Our school is very proud of Badriyah and Rabia and we congratulate them on their awards. They are very valued members of our school community and do an excellent job of embodying our STAR values of Service, Teamwork, Ambition and Respect.”

Rabia Shaikh commented, “I feel really proud to have been chosen to receive the Achievement Award. I was shocked and surprised to have won it, I definitely was not expecting it at all.”